Okay, y’all.  Scandal is cray-cray. Like really, it just keeps getting better and better.  There has yet to be an episode this season that I was not completely shocked at one thing or another.  I wish that I could talk to Shonda Rimes and ask her how she comes up with this stuff.  Does she just make it up as she goes along? Or does she know the entire story and just reveal it to us little by little? Huck … Jake … B6-13 … Rowan … Command … Eli Pope … etc.  I would like to think that she had it all figured out at the beginning. Yeah, that’s what I will choose to think.

While Olivia is having forced Sunday dinner with her father (Rowan/Eli), Jake and Huck break into his home and steal secret files off of his home computer. They see security footage from Fitz’s meeting with Command/Eli/Rowan and realize that the President knows about Operation Remington too. Then, scary people hop out of a black SUV and take Jake, and I am really scared for a few seconds that he is going back in the hole. But no reason to be scared – Fitz just wants to play b-ball! Then, we get a beautiful, sweaty scene.

Later, Jake runs into Olivia at the OPA office while using Huck’s computer to do some hacking into Fitz’s Navy missions. She confides in him that she is really on edge because Fitz always asks her to vet his jokes for the White House Correspondents Dinner, but he has not called her yet. She is really stressed out and probably worried that Fitz does not need her anymore. In an effort to convince herself that she doesn’t need Fitz either, she throws her Secret Fitz Phone into the trash can. Yeah, like that’s going to make the situation any better…

There is also this guy named Leo that apparently everyone wants to run their election campaign. He turns down Sally Langston, and then he turns Mellie and Cyrus down because Fitz looks like a loser – “He looks unhappy. He looks beleaguered. He looks like he hasn’t had a good screw in a long time. He looks like a loser. Your guy’s heart isn’t in it. He’s gonna lose … Right now, it smells like desperation. Like losing. It smells like Nixon in ’74 in here. I don’t do losers.” Then, he adds this little gem, “Besides we all know I’m really only here because you destroyed your relationship with Olivia Pope,” which of course gets Mellie’s wheels turning…

Newsflash: Pheobe Buffay wants to be the first female president. Let’s not pretend that any of us know what her name on this show is, because she has been and will forever be Phoebe Buffay. And that is perfectly fine.

Phoebe needs Olivia, but not to run her campaign like everyone assumes. She needs OPA because she placed a child for adoption at the age of 15 that no one knows about – and I mean no one. Not even Candace, her younger sister/best friend/chief of staff. Olivia tries to convince her to use this to her advantage and make a point for right to choose/adoption. But, Phoebe is adamant that she does not want this getting out to the press.

Pheobe Buffay says that there are about 5 people back in her hometown in Montana that may know about the baby – doctor, nurse, best friend, baby daddy, and cousin. So, all of the Gladiators hop on a plane to Montana to handle the situation. They pay off a few people, but then they hit the one problem person – Baby Daddy. Turns out, Cyrus’s guy has already gotten to him and scheduled a tv interview, where he will spill the proverbial beans. But have no fear, the Gladiators have it under control. They dig up some dirt on Baby Daddy and threaten to tell his wife about an affair he has been having if he tells the world about Phoebe’s baby. So Baby Daddy does the tv interview but only says really nice things about Phoebe Buffay and all is well. Cyrus calls his little intern guy to ask what happened – why Baby Daddy didn’t tell the world about the baby, and Little Intern has one of the best lines so far:

When the Gladiators confront the last person on their list, the nurse, she says a few sketchy things like, “That family took care of that baby,” “That baby stayed right here in Redwood,” “Louise wouldn’t have it any other way.” All the pieces fit together, and Olivia confronts Phoebe Buffay: she did not give up the child for adoption. Her mother raised the baby as Phoebe’s sister – Candace. No wonder Phoebe didn’t want the secret getting out, she didn’t want Candace to find out. Olivia once again tries to convince Phoebe to just address the issue head on and tell the media, but once again Phoebe shuts her down. She says that she doesn’t want to be President badly enough to ruin her relationship with her sister/daughter.

Phoebe Buffay is getting ready to take the stage at the Democratic Primary Debate.  Olivia infers that the news of Phoebe’s baby is going to be dropped during the debate, and she warns Phoebe to just tell the truth and use it to her advantage. Phoebe once again refuses. But of course, when Gov. Reston hints that Phoebe is hiding something from the American people, Phoebe’s only choice is to tell the truth – well at least about the child that she had at 15 and gave up for adoption. Post-debate, Phoebe is pissed and fires Olivia because this is her fault? And Candace does the math and figures out that Phoebe is actually her mother. Hey Candace, there are worse things that could happen then Phoebe Buffay being your mother. Just saying…

Oh, and can we talk about the fact that Gov. Reston killed someone last season?? Remember, he murdered the guy that his wife was having an affair with, but pretended that he was an intruder that tried to rape his wife? Remember?!?! And now he is trying to run for President again!! But then again, Fitz killed a Supreme Court Justice, and I still love him …. so … nevermind …

Cyrus and Fitz are in the Oval, when Fitz blurts out, “How do I get rid of B6-13?” Cyrus gets this frightened “I can’t believe you just said that” look on his face and glances up at the Oval’s cameras. He moves Fitz to the corner of the room (where everyone knows that the cameras don’t reach) and continues the conversation in whispers.

Cyrus tells the story of a man who questioned a line item in the budget (B6-13’s funding) and later “committed suicide.” I will have to admit that this whisper convo was quite creepy, especially when Cyrus says, “That’s how they took care of it. And that’s how they’ll take care of us. Only in your case, it won’t be suicide. It’ll be a lone gunman on a grassy knoll. Just ask Kennedy.” WHAT?!? Cyrus can you say that? Shonda, are you allowed to imply that??

Olivia is power drinking some red wine after getting fired, when her Secret Fitz Phone starts ringing from the trash can. That fleeting moment from earlier when she pretended like she didn’t care that Fitz hadn’t called her is way gone, and she lunges herself at the trash can to answer Fitz’s phone call. They proceed to have an almost normal couple conversation as Olivia helps Fitz write jokes for the White House Correspondents Dinner. It’s really cute.

Liv only has to say please twice to convince Jake to take her to the dinner because she is just that good. And can we please stop here to talk about her dress/hair. Everyone online/twitter seem to like her look. Well I absolutely hate it. Not saying that Kerry Washington doesn’t look great – of course she does – she looks gorgeous. I just feel like this look is NOT Olivia Pope. It is a little too Nicki Minaj or VMAs for me. I mean look how classy all of her other formal dresses have been, and then compare it to this look. No. I will never be convinced that Olivia Pope would wear something like that to a White House function. 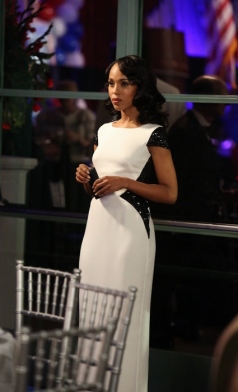 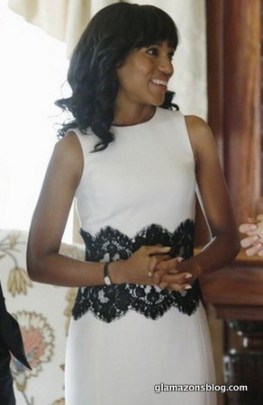 At the White House Correspondents Dinner, Olivia gets the nod from everyone’s favorite Secret Service Agent, Tom, and gets all hot and bothered thinking that she is going to get to see Fitz. Sike! It’s Mellie. She says that Fitz needs Olivia, that Olivia is his everything – so glad that Mellie realizes this. Then, Mellie literally begs Olivia to come back and run the re-election campaign for them.

YES! Do it, Liv! This seems like the best idea ever! Lots of Olitz moments out on the trail! This is brilliant!

But wait, Phoebe Buffay also changes her mind, and she wants Olivia to be her campaign manager. Ugh. Really, if Liv turns down the opportunity to spend all that time with Fitz to work with Phoebe instead – all of America is going to be really really pissed. Olivia tells Phoebe that she will sleep on it, but then goes home, puts on her “Grant for the People” shirt, and looks at photos from the campaign trail. I guess we know which way Liv is leaning … for now …

PAUSE. FOR A JAKE BREAK. He just needs to be appreciated.

JAKE BREAK over. Back to the story:

Huck and Jake are still doing investigative work into Operation Remington. They discover that Fitz was most likely in Iceland, when he was supposed to have been in Iran. During the time that Fitz was probably in Iceland, a 747 passenger plane crashed off of the coast – attributed to mechanical failure. But, all of the satellite images from those coordinates have since been erased and fisherman claim to have seen flares in the sky at the time. Huck suggests that Fitz shot down the plane on behalf of the U.S. government. Jake says that is just a coincidence, and Huck replies, “Two things make a coincidence. Three things make a conspiracy.” The third thing? Olivia’s mother was on the plane that was shot down.

Other random things that happened:

Sarcasm and I are like peanut butter and jelly.

I live in Alabama with my wonderful husband and great dane named Riggins. I do not discriminate against any television genres - I love them all.

What We Talk About