Mindy is ready to go home for the day, when she happens upon guys’ “Wings and Stings” night.  They are all playing a giant nerf gun war game which ends in Peter taking Mindy hostage at nerf-gunpoint and Morgan jumping out of the indoor foliage to win the game. 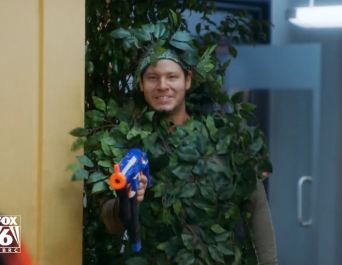 Mindy makes another shoebox diorama for her proposed gazebo and serenity garden for the office’s outdoor space.  However, Peter convinces all of the guys that it is the worst idea ever, and they need a grill and a basketball hoop instead.  Mindy realizes that Peter doesn’t exactly like her, and she seeks advice from Danny.  Danny suggests that Mindy take Peter out to lunch so that he can really get to know her. So of course, Mindy takes him the USA Girl Café, where her mom took her for lunch when she first got her period.  Peter tells Mindy that she is too self-involved – seeing as she took Peter to a super girly restaurant and did not even think about what kind of restaurant he might like. Oh, and Mindy brings Danny back a friendship cake that he is really cutely excited about. Look at that handsome smile:

So, apparently Morgan likes Tamra. Since Ray Ron is a “scrub” and forgot about their anniversary, Morgan concocts a romantic night of gazebo-building with Tamra. He tries to flirt with her, but she reminds him that she is still with Ray Ron even though he is not the most thoughtful boyfriend.

In an effort to do more cool bro things, Mindy agrees to attend Peter’s amateur MMA fight night. When all of the guys start talking about how hot the ring chick (Kendra Wilkinson Baskett) is, Mindy realizes that she is one of her patients. Kendra tells Mindy that her oldest just had a baby, so she is a grandmother now – and then, all of the guys are no longer interested.

Morgan goes looking for the bathroom, but instead finds an angry Ray Ron, aka Josh Peck, aka Josh from Drake and Josh – yep that Josh. [And let’s be honest, that’s not what anyone thought that Ray Ron would look like – which makes his character even more hilarious.] A fight ensues, but Morgan wins and throws Ray Ron in a dumpster. They then have a heart to heart about Ray Ron treating Tamra better and really appreciating her. But Morgan warns Ray Ron – “If this happens again, I’m going to steal your girlfriend. No, seriously.”

Everyone is trying to get Peter pumped up for his match by trash talking and saying really mean things – “You’re a worthless piece of trash,” “I banged your mom last night,” “You’re a big fatty, and everybody hates you.” Mindy thinks that she is helping so she yells, “Your ex-girlfriend Becca just got engaged. ‘Cause you’re such a loser. And she moved on … So get angry!” But, this has the opposite effect, and Peter just gets really really sad; therefore, he is not fighting very well.  He is getting destroyed and thrown around in the cage, and Mindy says, “What is happening? Peter is just standing there and taking it like he’s the wife in a country music movie.” Mindy bribes Kendra with the celebrity suite at the hospital the next time that she gives birth and manages to get in the ring.

She gives Peter a pep talk and tells him to imagine his opponent as someone that he hates – aka Becca’s new inner-city kindergarten teacher fiancé. [Mindy gets through spin class by imagining running over Michael Jackson’s doctor – “the one that stole Michael Jackson from us. I hate that guy!”] In round two, Mindy’s pep talk seemed to have worked, and Peter is fighting better. But then … he literally gets thrown out of the ring – like comes flying through the air and crashes into Spectator Morgan.

Post-fight, Mindy is kindly stitching Peter up. They sort of make up, and Peter decides that he might actually like Mindy a little bit.  Mindy: “To be honest, when you’re not around the other guys, you’re not that bad.” Peter: “When I’m high on pain killers, your voice isn’t that shrill.” And of course, Mindy takes that as a compliment and thanks him.  I love how Mindy always turns things around and pretends that people are complimenting her – she’s so positive and confident.

The next day Ray Ron shows up to the office.

He apologizes to Tamra for forgetting their anniversary.  He used a computer to look up what the traditional gift for a 20th anniversary is – china. “And while I can’t afford a whole country, I got you this” – and hands Tamra a stuffed panda. Tamra (to the panda): “I’ma call you ‘New Car’ because that’s what I really wanted.”

The episode ends with Mindy revealing the “Peter ‘The Punisher’ Prentice Memorial Basketball Park.” Peter allows Mindy to take the first shot, but when Mindy shoots, he blocks the shot because “that’s how bros play.” Then, he slaps Mindy’s butt because he is a total tool, claiming he “misread the moment.”

Oh, and the guy from the last episode – the one that didn’t think Mindy was cultured/sophisticated enough – he’s gone now.  He ended things with Mindy when she chose to go to a work thing over having dinner with him. And I think that he realizes that Mindy has deeply hidden feelings for Danny.

Danny: You need to take an interest in something that Peter cares about.
Mindy: For the last time, I will not listen to Phish. Songs should be three minutes long, and Nicki Minaj raps in the middle.
Danny: Look, tonight we’re going to this ultimate fighting thing. You should come.
Mindy: I’m sorry. I would rather deal with the dead mouse that’s trapped in my microwave than go to that.

Mindy: Looks kind of homoerotic to me.
Danny: There’s nothing homoerotic about grappling with another man, pinning him to the ground, and making him succumb to your will.

Peter: She got engaged to a male kindergarten teacher. When he asked her to marry him, the class did it, and they’re holding the “R’s” backwards.

Ray Ron: I just don’t wanna lose Tamra. She’s the best thing I got. And I own a water bed, man.

3 thoughts on “The Mindy Project Recap 2×6: Bro Club For Dudes”

Sarcasm and I are like peanut butter and jelly.

I live in Alabama with my wonderful husband and great dane named Riggins. I do not discriminate against any television genres - I love them all.

What We Talk About